Posted on September 1, 2006 by damonkrane 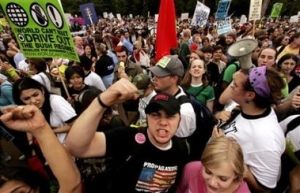 The vast majority of you are coming to live here for the first time, leaving behind you another life. No more high school. No more living under your parents’ roof. No more having to put up with your parents’ rules.

If that’s reason to celebrate, you’ve picked quite the place to do it. OU is frequently listed among the top ten party schools in the country -— last year ranked #2 by The Princeton Review; #7 by Playboy. And with OU students actually outnumbering all other Athens residents, the phrase “college town” takes on a whole new meaning. According to the most recent US Census, the median age in Athens is 22, with a whopping 67 percent of the population between l8 and 24 years old. For most students, the weekend starts on Thursday night. For some it never ends.

After the last 18 years, you certainly deserve some freedom — the freedom to have a good time, the freedom to be your own person. You’re living on your own now. Finally, it really is your life.

In your search for answers, you might want to consider that Athens County is more than home to a top party school. It is also the only one of Ohio’s 88 counties to have voted against the anti-gay issue #l amendment to the state’s constitution, and the only county in the region to have voted overwhelmingly against Bush in 2004. Both a Democratic Party stronghold and the site of the 2004 North American Anarchist Convergence, Athens is home to environmentally sustainable organic farms, a plethora of small, locally-owned businesses (including worker-owned cooperatives) and several experiments in communal living dating back to the 70’s. At the root of Athens’ progressivism is an unusual abundance of grassroots activism — with environmentalists, feminists, multiculturalists, labor unionists, LGBT activists, global human rights activists and more — all struggling for a better world.

I’ve been part of these struggles since I moved to Athens at the age of 19. In the seven years since, I’ve organized area high school students to defeat their school’s attempts to censor a Constitutionally-protected underground student newspaper. I’ve traveled cross-country with other Athenians to join demonstrations that derailed the World Trade Organization’s 1999 meetings in Seattle. I’ve exposed Ohio University’s violation of federal guidelines for informing students and employees of sexual assault ant hate crimes on campus, and I’ve helped organize the 2002 student walkout that forced OU into compliance with those guidelines. In short, I’ve learned from my own first-hand experience that ordinary people can change things for the better.

During the lead-up to the Bush Administration’s invasion of Iraq, I found myself addressing a crowd of students and community members gathered at the courthouse for one of countless local anti-war rallies. I asked how many of these people could say that, at some point in their lives, they had fought for positive change and won — whether as part of a campaign at their school, workplace or hometown, or a global movement for social justice. About 80 percent of the people present raised their hands — a far higher percentage than you’re likely to find among a crowd of people many places other than a protest rally in Athens. Why? Because to knowing that change is possible leads people to fight for more of it.

That doesn’t mean you’ll always win. For every successful effort I’ve been part of, two or three more have failed. Bush is still in his second term. The war on Iraq continues. Global capitalism, institutional racism, patriarchy, heterosexism and environmental destruction march on. But there’s no way to win it if you’re not in it. As the life-long radical US activist and author Noam Chomsky has said, “If you assume there is no hope, you guarantee there will be no hope. If you assume there is an instinct for freedom, there are opportunities to change things, there’s a chance you may contribute to making a better world. That’s your choice.”

I’m sure it wasn’t any picnic being an abolitionist in 1820 or a union organizer in 1880; a feminist in 1910 or a civil rights activist in 1920; a queer liberationist in 1965 or an anti-apartheid activist in 1985. None of these people were any more capable of knowing the future than we are. Many of them died before ever seeing the changes they fought for. But lucky for us they chose not to make hopelessness a self-fulfilling prophesy. 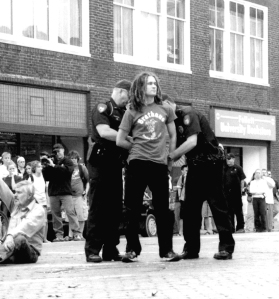 (The author is arrested at the intersection of Court and Union streets in uptown Athens at a demonstration on March 19, 2003, the day the US invaded Iraq. Photo by Lindsay Eyink)

No doubt, struggling for social justice requires self-sacrifice, but so does refraining from the struggle. We live in a world where 3 billion people live on less than $2 a day and 11 million children under the age of five die each year from easily preventable diseases. Within the US, 46 million people can’t afford health insurance and one in five children live in poverty, while the average CEO makes more money before lunch than a minimum wage worker makes all year. According to the US Public Health Service, African Americans make up 14 percent of all drug users, yet 35 percent of those arrested for drug possession are Black. As many as 25 percent of college-age women in the US have been sexually assaulted, the vast majority by men they knew. (Indeed, the flipside of Ohio University’s party school image is that in 2002 and again in 2004, more sexual assaults were reported at OU than at any other state-supported school in Ohio.)

Obviously, the list of injustices could go on. I say “injustices” and not “tragedies” because these are not inevitable facts of life anymore than were slavery, apartheid or the limiting of voting rights to white male property owners. Rather, they are the results of a social order that awards some people more power than others; an order which allows the few to dominate the many. None of us created the world we were born into. But with each passing year, by virtue of our actions and inactions, we become more responsible for its character.

“To wash one’s hands of the conflict between the powerful and the powerless,” said the radical Brazilian educator Paulo Freire, “is to side with the powerful, not to be neutral.” But regardless of how comfortable our own lives are, siding with the powerful at some level always requires us to side against ourselves. That’s because refusing to grapple with injustices you don’t yet know how to solve doesn’t only ensure you will never find their solutions, it also requires you to shut down the very parts of yourself that would care enough to do the grappling –- as you become porgressively less aware of, and less engaged with, the world around you.

At a time when you’ve finally got the space to stretch out and grow why make all of this off-limits to yourself? Why not instead dream of a better world than the one you were born into, and set out to help create it? If that’s the choice you make, you’re sure to find yourself in good company here in Athens.

This entry was posted in Commentary. Bookmark the permalink.