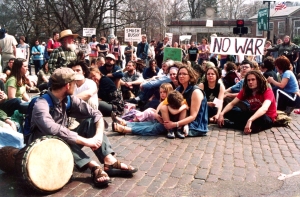 Krane (right, in red shirt with dreadlocks) on March 19, 2003 joins a crowd of anti-war demonstrators sitting-in at Court and Union, the main intersection of uptown Athens, Ohio which borders the main campus of Ohio University. Photo by Lindsay Eyink

I was heavily involved in the anti-war movement of the past decade as both an organizer and a writer. Thus to mark today, the tenth anniversary of the U.S. invasion of Iraq, I am posting a collection of my writing on that war.

Of the material that makes up today’s post, some is old writing that was published in various newspapers and one magazine between 2002 and 2007. However, there are also several pieces of “new” old writing, written between 2002 and 2007 but not published until now. Finally, you’ll find a piece I wrote last month as a kind of afterword that wraps up some of the topics addressed in these pieces.

The second installment of my war anniversary-related writing, which I hope to post within the next few days, will be a completely new piece that I’m currently writing: a retrospective critique of the anti-war movement.

As I type these words as a 33-year-old, at 2:00 a.m. on March 19, 2013, I am reminded that exactly ten years ago a 23-year-old version of myself was up late spray painting banners for the following day’s anti-war rally. The Ohio University Post captured that night on my front porch in Tim Pappa’s March 20, 2003 article, “Students prep for disobedience,” and as the Athens News reported in its March 20, 2003 article, “Students choose between studying for finals and protesting against war”

“Krane and senior Roger Hill climbed onto the roof of Perk’s Coffee Shop during the rally at Court and Union streets and dropped banners with phrases such as, “If you liked Sept. 11, you’ll love the war on Iraq” and “Anti-war is not anti-American.”

“Krane and Hill were also among the group of students who refused to leave the street after the scheduled sit-in and were arrested by Athens Police. Both said they felt their choice to engage in civil disobedience was worth the price and they would do it again.”

And we did. Again and again over the years that followed.

How much it changed is debatable and, indeed, the subject of a lot of my writing. I hope you’ll check out some of this work. I hope it will amuse, inform, inspire, outrage and infuriate you. But on this grim anniversary, most of all I’m hoping we can all still learn something more from the countless tragedies of the past decade.

Our institutions have failed us; it’s up to us to make a change
March 1, 2003
Speech delivered at anti-war rally on OU’s College Green, organized by Roger Hill

Weighing the human costs of war from a safe distance
April 10, 2003
Athens News

OU students unite! You have nothing to gain but civic responsibility!
November 8, 2005
**PREVIOUSLY UNPUBLISHED**

Is this supposed to be a lesson on media ethics?
April 15, 2006
The InterActivist 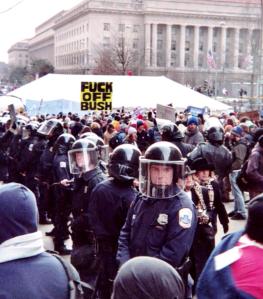 This entry was posted in Commentary, Essays, Interviews. Bookmark the permalink.