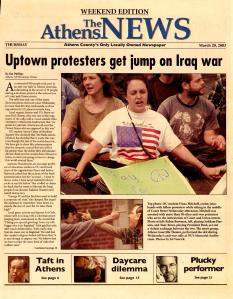 An estimated 500 people took part in an anti-war rally in Athens yesterday, culminating in the arrest of 39 people during a sit-down protest at the intersection of Court and Union streets.

The rally was only one of the many demonstrations that took place Wednesday in more than 60 cities nationwide, to show opposition to U.S. plans to invade lraq.

Local organic farmer and U.S. Navy veteran Rich Tomsu, who was one of the organizers of the rally, told a crowd outside Ohio University’s Memorial Auditorium that “we speak for patriotic Americans all over the United States who are opposed to this war.”

OU student Aaron Carter of Students Against War declared that “the Bush administration has decided that it wants this war, even though the rest of the world does not. …We have got to show this administration that the domestic cost of this war will be far greater than the riches they will plunder abroad. Bush and his cronies have refused to listen, so we’re just going to have to change this world around them.”

Jaylynne Hutchinson, an associate professor of cultural studies in education at OU and board chair of the Appalachian Peace and Justice Network, joked that the actions of the Bush administration has her “so mad. .. I want to throw rocks. I have never wanted to throw rocks in my life before.” She scoffed at claims by Bush that he wants to liberate the Iraqi people from dictator Saddam Hussein and install democracy.

“George W. and the Bushites want to build a corporate oil state,” she charged. She urded the audience to remember, “your heart is a muscle the size of your first. So raise them high.”

Local peace activist and farmer Art Gish, whose wife is in Iraq with a Christian peace-keeping team, announced to the crowd that “I bring you special greetings from my wife Peggy, who is in Baghdad.” Gish said his wife, after much deliberation, “feels really clear that she must stay in Baghdad.” He said that the couple’s religious beliefs tell them that “it is not enough to oppose war. We believe that we have to take the same kind of risks that soldiers take.”

With U.S. bombardment set to begin any time after Wednesday night, Gish said Peggy Gish’s life is obviously in danger. “She is ready to die, and I feel at peace about that also,” he said. “That is certainly not something I want, but I am at peace about that.”

After speeches, songs and satirical skits at the rally, the crowd set off on a march around the center of Athens, moving north up Court Street, west on Washington, south on Congress, and back up Union to the intersection in front of the College Gate. Among the marchers was l4-year-old Nick Hogan, who despite cerebral palsy, pulled himself along the street in a walker with the help of his mother Mary Hogan. Asked what made the struggle worth it, he replied, “I don’t think we should kill people just for oil.”

OU student Roger Hill worked up the crowd with a stirring denunciation of what he called the Bush administration’s hypocrisy in exploiting the Sept. I 1 terrorist attacks to justify an attack on Iraq. He added that half Iraq’s population is children under 15. “That’s what the mother of all bombs is going to be dropped on,” he said. “Poor, starving children.”

Kathy Galt told the crowd that “our country has been hijacked. This administration was not elected, it was selected.” She said the top figures in the Bush administration “have had these (war) plans for a long time.”

About 50 people gradually formed a sitting circle in the intersection. By prearrangement with city police, shortly before 1:30 p.m. Police Chief Rick Mayer took over the microphone to announce to the intersection-blockers that they were causing “annoyance and inconvenience” and had five minutes to leave before being arrested.

Among the sit-down protesters was OU student Jessica Hollings, who told The Athens News before Mayer’s announcement that she hadn’t yet made up her mind whether to commit civil disobedience. “If it’s for something that is a good cause, Id be willing to make a sacrifice to state my belief,” she said, “because I believe it strongly, and it’s time for some real democracy.”

As things turned out, Hollings did stay with the protest circle, and was among the 32 arrested. A few other people were also seen being led off by officers, apparently for ignoring police orders to stay on the sidewalk.

During the anti-war activities, there were few if any shows of opposition from supporters of Bush’s Iraq policy.

h an e-mail Tuesday evening, Peter Lehman, head of the OU College Republicans, said that his group and other Bush supporters didn’t plan any demonstrations before the war breaks out. But he said his group hopes to organize a rally “that (hopefully) dwarfs the side of that of the local protesters,” and to plan other “new and creative things to show student support for the troops.”

He also contended that the protesters in Athens “are not anti-war, they are anti-Bush and anti-American.” He claimed none of them “were out in the streets” during Clinton administration foreign policy adventures.

“All of these people, the Gishes and wannabe hippies of the world, all they want is attention. They will protest anything,” he said. “Put it this way, is there any protest movement that the local lefties haven’t backed in the past several decades? They have no credibility.”