Yes it can: Protest group all rhetoric, no plan

The Athens Can’t Wait Coalition, an alliance of several liberal groups on campus, will stage a class walkout tomorrow morning to protest the ongoing war in Iraq. That will be followed by a march to the local recruitment center for the Ohio Army National Guard. The protest comes at the one-year anniversary of President Bush’s re-election. Although Bush’s mistakes are many and his administration deserves criticism, that type of protest is not a constructive way for people to convey their displeasure with the Bush administration. Because of their unfair targeting of the military and its recruiters, as well as the hints of radicalism surrounding their intentions, the Athens Can’t Wait Coalition is making a mistake. The average Ohio University student is best to ignore their misguided efforts and continue with class.

The coalition is tied to the broader international group World Can’t Wait. Though they stress nonviolence in their approach, their goal is to remove what they have labeled the “Bush regime” from the White House. The fact coalition members seemingly are intent on ignoring is that President Bush was elected democratically. The change they want to effect should result from educating people to think more critically about their choices at the voting booth, not by bullying recruiters and calling for the removal of the Bush administration. There is nothing wrong with protesting, but the group should tone down their rhetoric.

The challenge of removing a president from office without resorting to violence seems daunting. That is probably why the Athens Can’t Wait Coalition is beginning with something as needlessly obstructive as besieging a recruitment center. The War in Iraq was not declared by soldiers or their recruiters, yet it is those individuals who are being targeted. Protesters seem to forget that to America has a volunteer army. Admittedly, there are economic factors that go into a person’s choice to join. However, that is a far cry from the days of the draft. If the coalition wants to march somewhere, perhaps they should do it at the halls of government where wars are declared and decisions affecting the public are made. However, given tomorrow’s protest, it does not appear that Athens Can’t Wait will use that sort of forethought when planning their activities. According to them, tomorrow’s protest is just the beginning. It should also be the end. 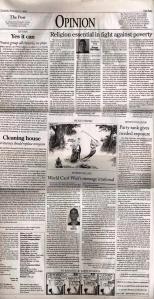 2 Responses to Yes it can: Protest group all rhetoric, no plan