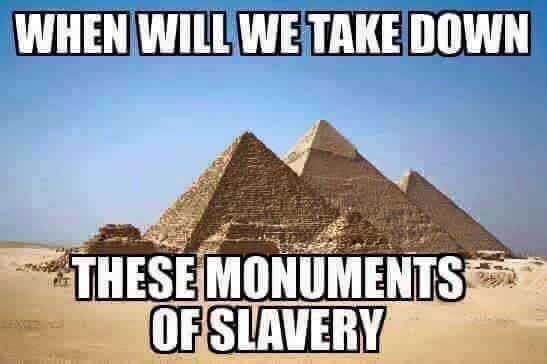 A popular new meme is making the rounds among conservative Facebook users. With a photo of Egypt’s pyramids as the backdrop, the meme asks “When will we take down these monuments of slavery?”

Young Conservatives, a website claiming to have had 13 million views last week and boasting more than a quarter a million likes on Facebook, declared in a June 30 headline that this purportedly brilliant creation is “Probably the Best Meme EVER About the Confederate Flag ‘Debate’ in America.”

And maybe they’re right. Because I can’t think of any other meme that better illustrates the modern conservative movement’s marriage of racism and stupidity.

Well, except maybe the meme equating the offensiveness of the Confederate flag flown over government institutions to the offensiveness of young black men wearing baggy pants below their waist lines… or probably a million other memes that, thankfully, never get to grace my computer screen.

But when the pyramids meme appeared before me compliments of a white man who remarked “Like it or not, it’s history,” I decided to try to turn this meme into a teachable moment.

In case the meme’s intent isn’t clear to you, let’s start with how Young Conservatives contributor Michael Cantrell describes it.

“Ever since the horrible shooting in Charleston, South Carolina, liberals have been fighting day and night to have the Confederate flag removed from every part of society, whether doing so violates someone’s rights or not.

“They’ve also begun to start demanding statutes of famous Civil War figures and other people throughout history be taken down because they’re ‘monuments to slavery.’

“Well this little meme right here poses the question about why race baiting progressives haven’t demanded these ‘monuments’ [Egypt’s pyramids] be taken down, since, you know, slaves helped build them…

“…there is a theory that claims Jews helped build the pyramids, and even though we might not know 100 percent for sure that happened, you don’t want to accidentally soil your liberal anti-Semtic, pro-Palestinian record by supporting them, right?”

So, yeah… That cleared up everything, right?

If you’re having trouble herding Cantrell’s catty mess of right-wing wackiness into a coherent thesis, don’t worry – Cantrell is, too. So he transitions swiftly into this conclusion.

“In other words, the point I’m trying to make is the whole thing is ridiculous, there are bigger issues facing the country, so how about we take care of some REAL business and fix this mess our nation’s in?”

That’s right. If all else fails, just act like American white supremacist racism doesn’t matter. I guess Cantrell summed up the meme’s intent after all.

And the reason we want the flag removed from such locations is not because the first copies of these flags were made from cotton picked by slaves. It’s not that their seams were sewn by slaves. It’s because the so-called Confederate flag always has been a symbol of an organized and murderous movement for white supremacy supported by official state power.

The flag that Dylann Roof brandished proudly on social media, and which Bree Newsome tore from a flagpole on the South Carolina capitol grounds, was one of many different flags designed and used by white supremacist forces in a war they fought to protect slavery. As James Loewen’s July 1 piece for the Washington Post reminds us, seceding states explicitly declared that they were fighting against states’ rights (specifically, Northern states passing state laws that interfered with the Fugitive Slave Act, a federal law) and for the preservation of slavery.

Over the course of its four-year existence, the white supremacist movement that went to war to protect slavery, calling itself the Confederate States of America, represented itself with a succession of three different national flags, the first of which alone passed through four different variations. None of them were what we call “the Confederate flag” today, but they were bad enough.

The second flag of the CSA – “The Stainless Banner” – was created by William Thompson, a newspaper editor who had criticized the first CSA flag – “The Stars and Bars” – for looking too much like the U.S. flag, something which Thompson made clear represented “the abolition despotism against which we are fighting.”

Thompson was quite clear about what a Confederate flag symbolized. “As a people, we are fighting to maintain the heavenly ordained supremacy of the white man over the inferior or colored race,” he wrote. And for this flag designer white supremacy was not just a national cause but a global one, too. Thus Thompson predicted his flag “would soon take rank among the proudest ensigns of the nations, and be hailed by the civilized world as THE WHITE MAN’S FLAG.” (original emphasis)

Yet neither Thompson’s flag nor the other two national flags of the Confederacy are what we call the Confederate flag today. The latter is in many ways a 20th century invention.

Adapted from the CSA Naval Jack and the battle flags of the Confederate armies of Northern Virginia and Tennessee, this new Confederate flag was popularized not by the white supremacist would-be nation that came into being to defend slavery in the mid 1860s, but by the Ku Klux Klan and segregationist Dixiecrat politicians who resurrected and repurposed a symbol of a white supremacist slave society for the fight to preserve white supremacist segregation from the late 1940s through the late 1960s. As they did, their new Confederate flag came to fly over southern capitols and city halls, and to be incorporated into the re-designed flags of several southern states. This time it was not about fighting the Civil War; it was about fighting Civil Rights.

Decades later, as a teenager in 1997 I watched Klansmen brandishing Confederate flags as they stood shoulder to shoulder with swastika-clad neo-Nazis in opposition to an NAACP march in Claysville, Pennsylvania. The march was organized after a cross had been burnt on the lawn of the town’s only interracial couple, presumably a familiar calling card from the Klan.

My curiosity soon led me to the website of “America’s Invisible Empire, Knights of the Ku Klux Klan.” The first image I saw there was the Confederate flag. Beneath it, the Klan implored readers to “Fly the battle flag with pride, for we are at war again.”

This July 18, it is the KKK that will gather at the South Carolina state capitol to protest the removal of a 20th century Confederate flag that finally has become difficult even for conservative politicians to defend. A symbol of slavery resurrected in defense of segregation, the Klan has always been the flag’s rightful owner, even before the Klan was around to claim it.

So what of the conservative meme’s comparison of the Confederate flag to Egypt’s pyramids?

Were Egypt’s pyramids created to symbolize a pro-slavery movement at the precise moment that movement was fighting a war to protect slavery?

During the last century, have Egypt’s pyramids been adopted as the symbol of a modern Egyptian movement for racial apartheid?

Has the Egyptian government tried to place the pyramids and the buildings that house its key decision-making bodies in close proximity to one another?

Sorry, young conservatives. There is no comparison here.

But there are some other comparisons you may find less comforting.

The Washington Post reported July 1st on a 2004 survey of more than 500 Georgians that found support for the Confederate flag highest among two groups: white racists and those ignorant of Confederate history. But I suspect the two groups are often one and the same. Just as ignorance of history can nurture racism, racism can motivate people to be willfully ignorant of history.

In the case of the Confederate flag, a banner born from a war to protect slavery was reinvented by militant white supremacist segregationists, only to then be defended by many whites as a matter of “Heritage Not Hate”, something with no more contemporary political significance than the pyramids of Egypt. (But didn’t this year’s Republican presidential hopefuls initially suggest the Charleston AME murders weren’t about racism, thereby proving that climate change isn’t the only thing they’re willing to deny despite substantial evidence?) In America, the promotion and denial of white supremacy are both cut from the same cloth. It is only fitting that they would be represented by the same flag.

And it is also only fitting that as manifestations of American white supremacy continue to be challenged by the new civil rights movement, Black Lives Matter, you can expect to see more conservative stupidity coming to a meme near you.